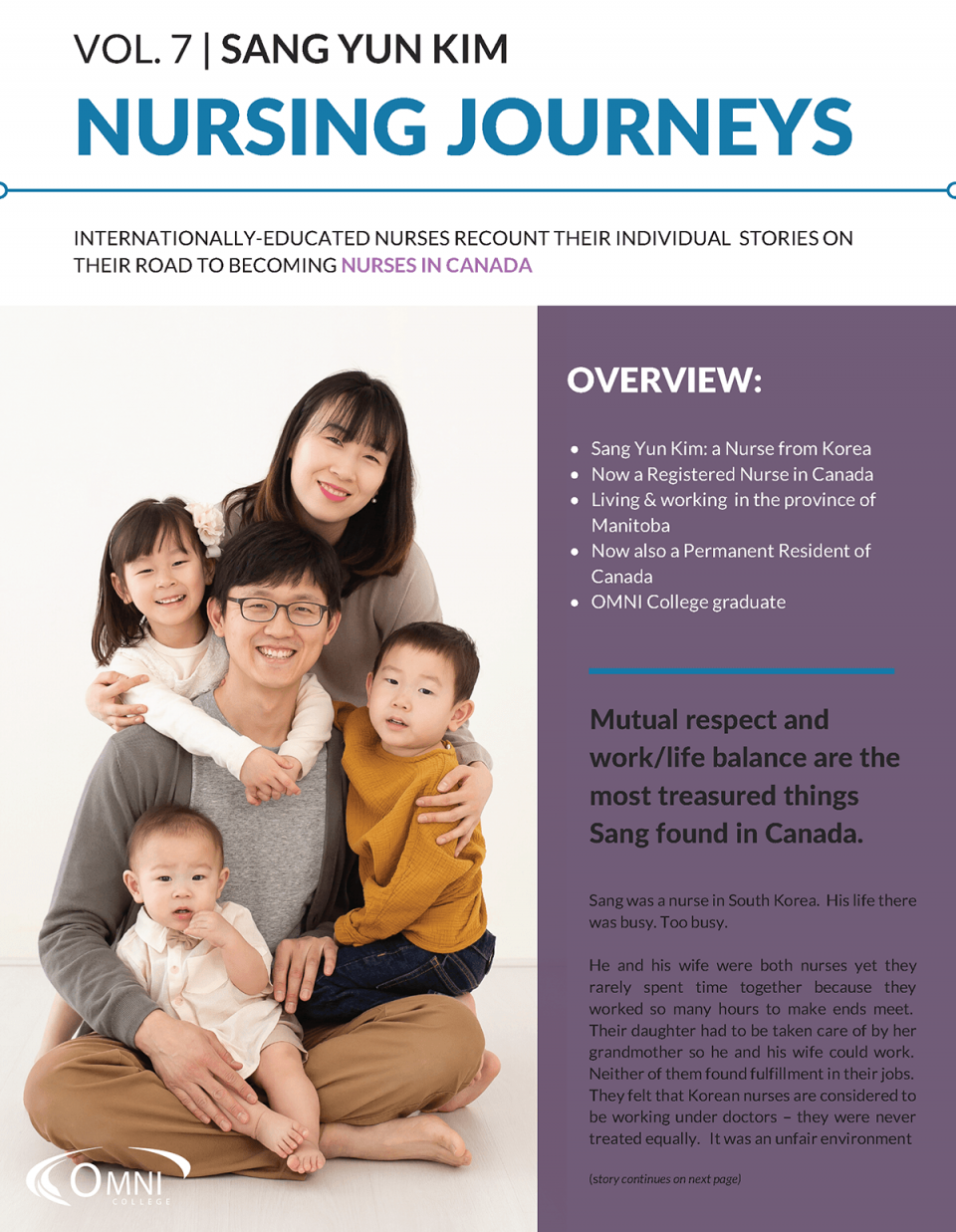 Download the full story as a PDF (Vol 7_SangYunKim) or continue reading below.

Mutual respect and work/life balance are the most treasured things Sang found in Canada.

Sang was a nurse in South Korea. His life there was busy. Too busy.

He and his wife were both nurses yet they rarely spent time together because they worked so many hours to make ends meet. Their daughter had to be taken care of by her grandmother so he and his wife could work. Neither of them found fulfillment in their jobs. They felt that Korean nurses are considered to be working under doctors – they were never treated equally. It was an unfair environment.

Since Sang had spent a few years studying in the USA during high school, he knew he wanted to study abroad again. This time, however, he chose Canada because of it is known to be a very safe country. He had also heard a lot of good things about how the nurses are treated in Canada.

He came to Canada through an agency – which originally placed him in a different school in downtown Vancouver. Within his first few days in class, Sang was dissatisfied with that school and realized it would never help him attain his goals.

He ended up making an appointment to sit in on a day of class at OMNI College, and within a few minutes of that class he knew instantly that he needed to switch schools.

“OMNI had exactly what I needed. The classes in the lab helped me the most for my practice as well as preparation for the clinical exam. It wasn’t just that though – the classes covered everything, even about how to think and practice like Canadian nurses.”

“The journey to become a Canadian nurse was not an easy one.” But Sang says his wife supported him to focus on studying, and his classmates all encouraged one another to stay focused and become successful. “All of the staff at OMNI gave me strength to continue my journey – they supported me not only academically but also emotionally.”

Asides from the studying and written examinations, it was the skills assessment that was the most challenging for Sang.

“I am a type of person who gets really nervous when someone is watching me doing something and the
assessment made me really nervous because not only the assessor is observing me performing skills but also I only had one chance. Moreover, you will not know what to expect on the skills assessment. Those were very challenging to me.”

Despite his nervousness, he ended up scoring very well on that skills assessment.

“I made the right decision to come to Canada.”

Now, Sang works as a Cardiac ICU nurse in Winnipeg, Manitoba, where he is treated equally as the doctors.

He feels that his patients really do appreciate what nurses do. He told us that “I have actually received several thank you letters from my patients. It really made me happy and I know I made the right decision to come to Canada.”

He is a now a permanent resident of Canada, and qualified through the Skilled Worker stream.

Today, Sang appreciates the fact that he gets to spend time with his family. He earns enough money to support his entire family, so now his wife can stay home and raise their 3 children. Being able to do this “is a great turning point in my life,” he says.

When asked about what he loves the most about Canada, he sums it up into a few key things: Respect, Career Growth, Work/life balance with his family, and education for his kids.

“Not only do the doctors respect your opinion but we also work together. There is no such thing as someone in a higher position than the other. The nurses, doctors as well as other therapists such as physio therapists, respiratory therapists and many others work together as a team and we set the goals for the patients together.”

He also talks about the opportunities to further his career as a nurse. “Here, you have a variety of options to choose among to advance your career. You can progress to a Master’s degree, get into teaching, become a nurse practitioner, or have more advanced practice training. You can even choose to be a travel nurse. I may have been able to do these as well in Korea, but it would have been impossible when I have a family to support. Not to mention I would never get to see them.”

“Canada is special to me because it gave me a life with my family. Raising children in Korea is very costly. Statistics say it costs 1 million dollars to raise a child from age 1 to 18 in Korea. Moreover, it was extremely competitive when I was studying in Korea and very stressful. My friends back home say it is getting even worse.