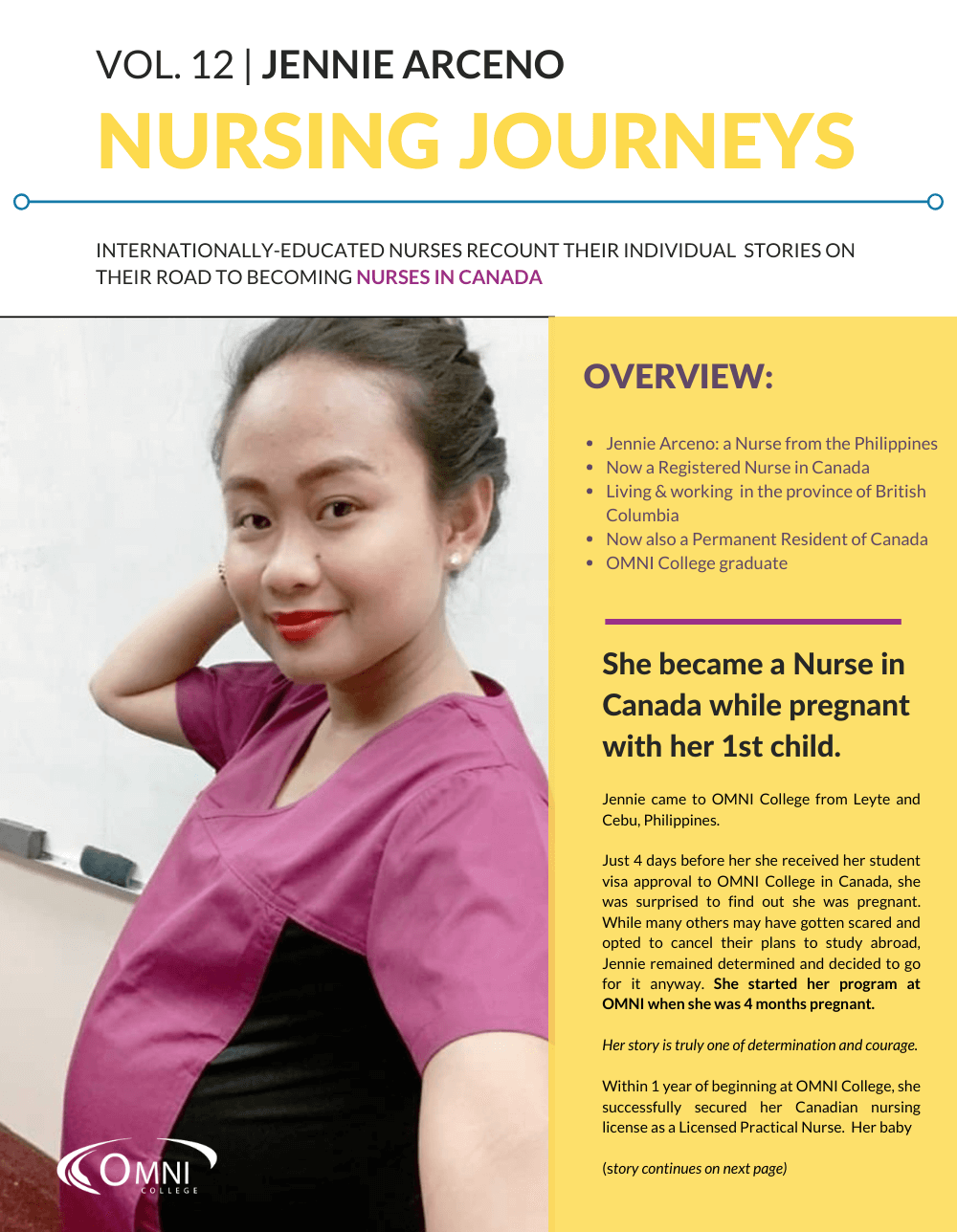 Download the full story as a PDF (Vol_12:Jennie_Arceno) or continue reading below.

Jennie came to OMNI College from Leyte and Cebu, Philippines.

Just 4 days before her she received her student visa approval to OMNI College in Canada, she was surprised to find out she was pregnant. While many others may have gotten scared and opted to cancel their plans to study abroad, Jennie remained determined and decided to go for it anyway. She started her program at OMNI when she was 4 months pregnant.

Her story is truly one of determination and courage.

Within 1 year of beginning at OMNI College, she successfully secured her Canadian nursing license as a Licensed Practical Nurse. Her baby was born (a son!) during her studies, and she continued to study while getting the help of her new extended family – her fellow nurse classmates at OMNI – to help her take care of her baby in those early days.

With her new Canadian LPN license, she began working as a nurse in a small town in British Columbia, called 100 Mile House. There, she was able to earn a high salary as an LPN after just 1 year of being in Canada. It was an extremely tough decision, but she had to part with her son and brought him to be cared for by her family in the Philippines temporarily so she could remain focused on her end goal.

Her decision to go to 100 Mile House took a complete leap of faith, one that ended up giving her an amazing experience for her career – and ultimately a beautiful life for her family too.  Her husband and baby were able to join her there just a few months la 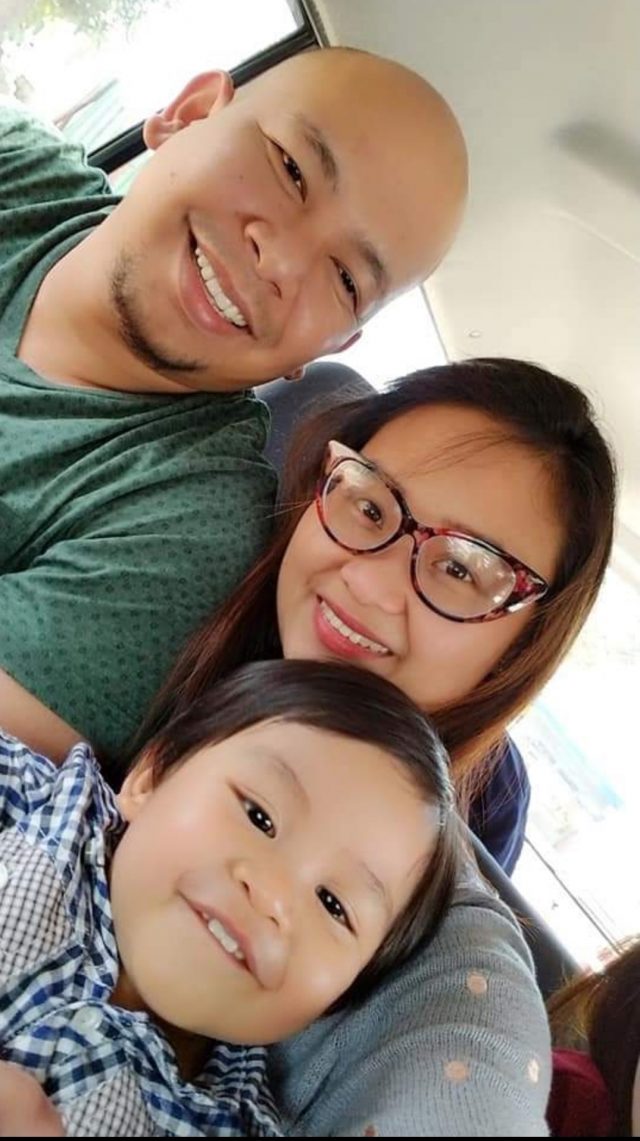 ter. Jennie and her husband are now Permanent Residents and her babies (2 boys now) are Canadian citizens.

In fact, Jennie chose to name both of her sons with the initials BC – to represent her destiny to raise them in BC: British Columbia, Canada.

Jennie continued to work as an LPN in that small community for the next 2 years. During that time, she never lost sight of her end goal, which was ultimately to become an RN in Canada. She achieved this goal in 2019.

Once she got her RN she got 3 job offers right away. She decided to move to a larger city and ended up choosing Vancouver Island as it felt a little closer to the island lifestyle from where she was from in the Philippines.

She still remembers fondly though about her time in small-town BC. Although they had some tough, culturally challenging moments, including winters of -37 degree weather, driving in the snow, and having little to no access to public transportation, she loved the people there who she says were all so welcoming to her and her family.

She gained such amazing Canadian work experience, much of which she wouldn’t have had in a larger city, and she took on tremendous responsibilities as a nurse there. This experience all helped to springboard her into a successful career today as a Registered Nurse.

When thinking about the differences between her life now compared with her life back in the Philippines, she says that her salary now in Canada is so high, that in 1 day she earns the same as she would for 1 month as a nurse in the Philippines. Her regular schedule includes 4 days of shiftwork, and then she has the next 4 to 5 days off. During those days off, she gets to take her family to explore all the beauty of the province of British Columbia (and also the neighboring province of Alberta too!).

At her hospital, two other OMNI graduates have now joined her on her ward as well. Jennie has also become an advocate for Internationally-Educated Nurses. She is making efforts to push greater streamlining for IENs to transition to Canada and was even featured by the BC Nurses Union.  You can read the BC Nurses Union feature here too on page 26.

After all, Canada needs experienced nurses desperately, and while she agrees there will always need to be some transitional training needed to help IENs to adjust to Canada, she says the long processing wait times from the regulatory bodies should be made easier and quicker. She is committed to making a difference for IENs in Canada, and she says that she will always support all future OMNI alumni who wish to join her workplace on Vancouver Island as well.

Based on what Jennie has proven to be capable of so far, we can’t wait to see what she does next. 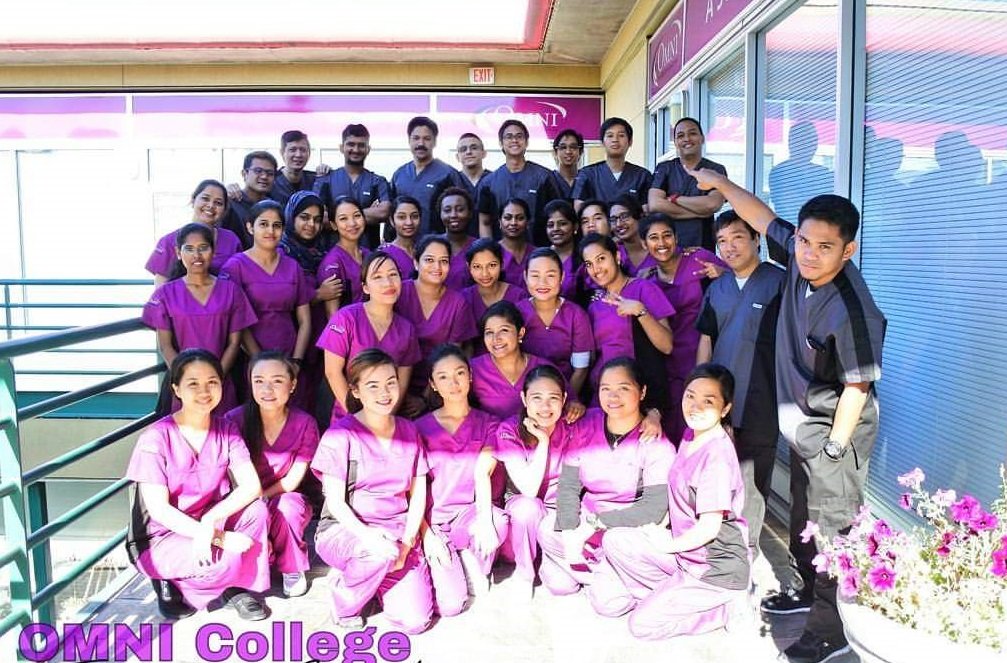 Jennie and her classmates at OMNI College

Download the full story as a PDF (Vol 12_Jennie_Arceno)