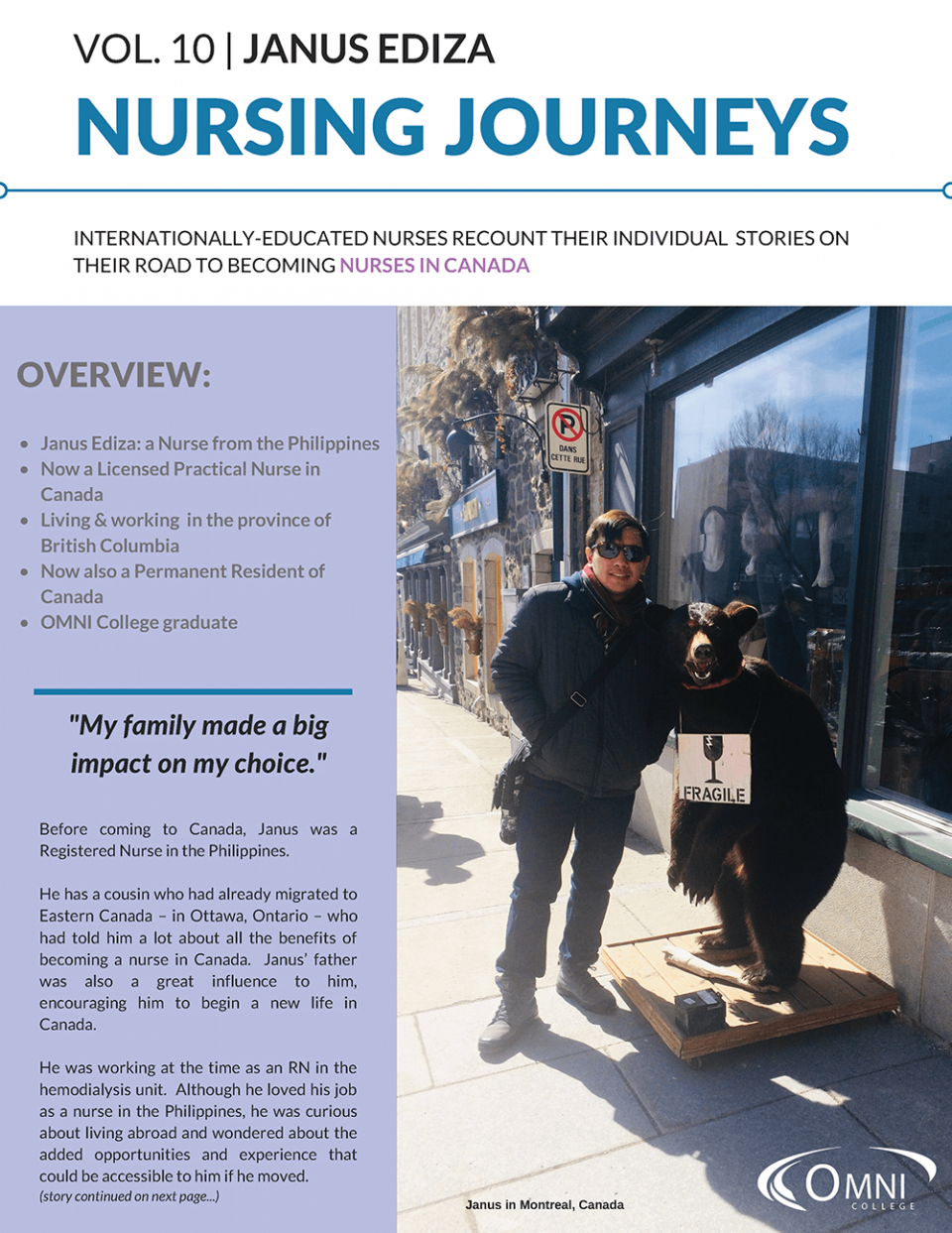 Download the full story as a PDF (Vol 10_JanusEdiza) or continue reading below.

“My family made a big impact on my choice.”

Before coming to Canada, Janus was a Registered Nurse in the Philippines.

He has a cousin who had already migrated to Eastern Canada – in Ottawa, Ontario – who had told him a lot about all the benefits of becoming a nurse in Canada.  Janus’ father was also a great influence to him, encouraging him to begin a new life in Canada.

He was working at the time as an RN in the hemodialysis unit.  Although he loved his job as a nurse in the Philippines, he was curious about living abroad and wondered about the added opportunities and experience that could be accessible to him if he moved.

At first, he thought about joining his cousins and other relatives in Ottawa.  But after researching his range of options, he decided to join OMNI College in Vancouver due to its specialization in supporting Internationally-Educated Nurses like him.

Throughout his program at OMNI College, Janus always felt supported the whole way through.  He says “My family helped me tremendously throughout this whole process.  The journey was tough, but they were always there to remind me and encourage me to never let go of my dreams and aspirations to work as a nurse in Canada”.

Janus is now a Licensed Practical Nurse in Canada.  He works in the city of Grand Forks, British Columbia.

For him, he felt the most challenging part was being away from his family – adapting to living alone and becoming independent. At the same time, he had to adjust to a brand new culture too.  He says that “Back in the Philippines, I always had my family to rely on.  Living here, for the first time I’m on my own, and I had to grow to be independent, make much more mature decisions, and take responsibility for myself.  I’ve grown a lot.”

Janus has also built relationships with new ‘family’ in Canada through his classmates from OMNI College, as well as with friends he has made in Grand Forks.  Although OMNI alumni work in all parts of the country, the bonds formed during his days at the College remain strong, and he continues to keep in touch with several classmates.

When he reflects on what his life is like now compared with back in the Philippines, he speaks about the difference in the structure of the nursing profession.  He explains that “Back home, nurses are part of an actual hierarchy and we are very much more reliant on what the doctor’s say and do.  Here in Canada, nurses have more of an independent role and can give suggestions and recommendations to doctors on what the patient needs.  We’re an actual team, rather than us taking orders from a doctor.”

He also shares that “I love my work here in Canada.  My coworkers and employers are so supportive in what I do and they all genuinely want me to excel in the work that I do.  Even though I did enjoy my work in the Philippines, it’s so much better here.”

After now having been here for some time, Canada has become very special to him.  He says that “I’ve learned so much more about myself and what I’m capable at.  I can do a lot more than I originally thought, and this country has helped me grow into a more independent and strong person.  For that reason, this country will always be very special to me.”

On his days off Janus enjoys the outdoors and the beautiful surroundings of living in British Columbia.  He has begun snowboarding during the winters, and wants to try camping in the summer.  He shared that “I want to try camping soon, but I’m a little afraid of the possibility of bears, lol!”

Janus received his invitation to apply for Permanent Residency for Canada.  He applied through the BC PNP and Express Entry immigration program of Canada.

Through it all, he thanks his family for influencing him to consider Canada.

“I believe that the greatest life-changing decision I ever made was when I decided to come here to Canada and to start my journey of becoming a nurse.  It took a tremendous amount of courage to leave my family and come here on my own, but I’m so glad and thankful that I did.”~ Janus Ediza, LPN

Download the full story as a PDF (Vol 10_JanusEdiza)