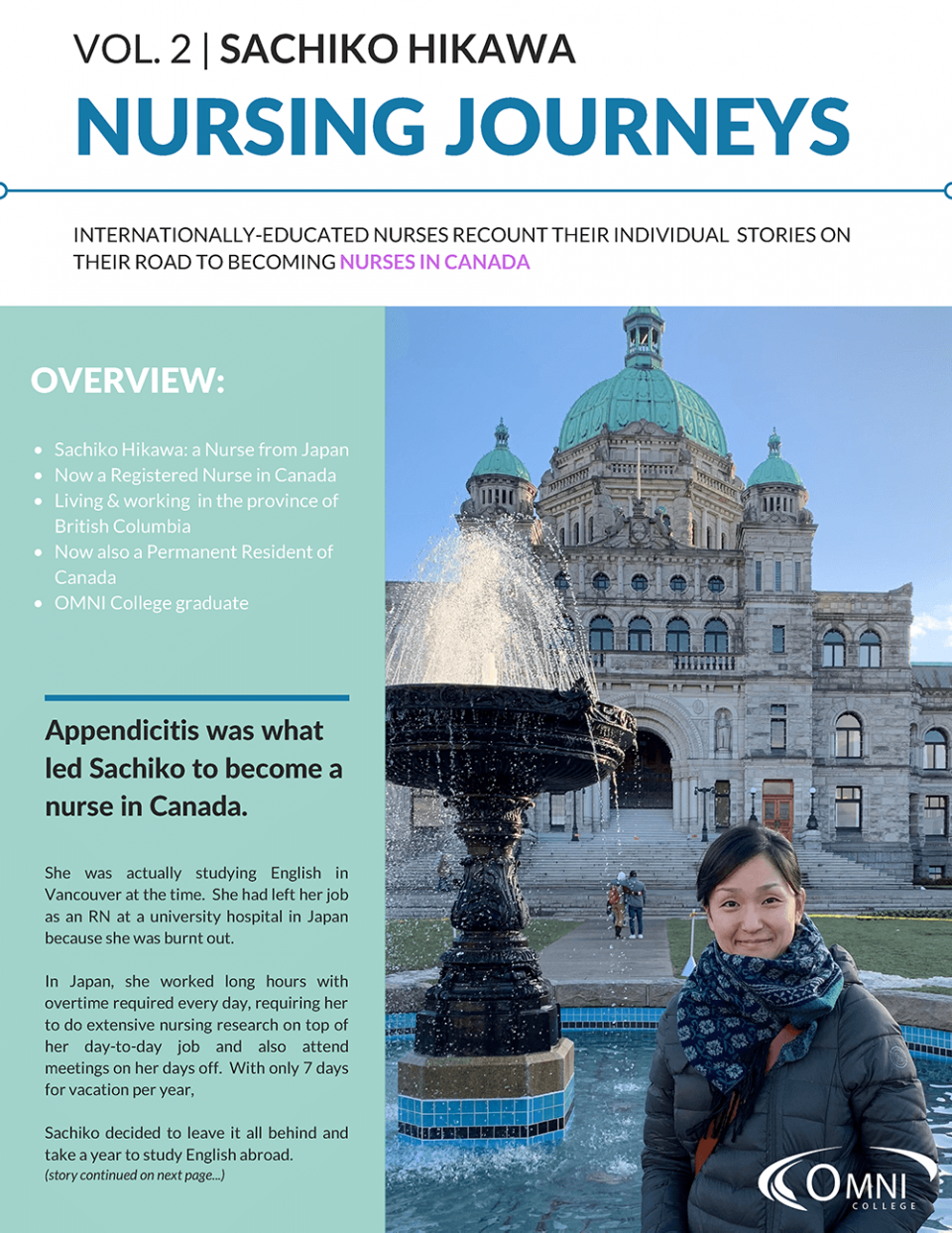 Download the full story as a PDF (Vol 2_SachikoHikawa) or continue reading below.

Appendicitis was what led Sachiko to become a nurse in Canada.

She was actually studying English in Vancouver at the time.  She had left her job as an RN at a university hospital in Japan because she was burnt out.

In Japan, she worked long hours with overtime required every day, requiring her to do extensive nursing research on top of her day-to-day job and also attend meetings on her days off.  With only 7 days for vacation per year,

Sachiko decided to leave it all behind and take a year to study English abroad.

In 2009, she came to Canada on a 1-year working-holidays visa.  Her plan was to return to Japan after that year was up, and had no thought at all at the time to pursue nursing in Canada.

But 2 months after she arrived, she got appendicitis suddenly and ended up in a hospital needing surgery.  She was extremely scared because she was not able to communicate easily being in a foreign language environment.  Luckily, she had a Japanese friend who came to help her.  He later became her husband.

After that ordeal, she actually still didn’t think to pursue nursing because she knew it was tough and it seemed impossible to obtain.  But then one day while out walking down a street, a lady suddenly yelled at her for no reason.  Sachiko was very shocked, angry, and also disappointed in herself for not being able to yell back and defend herself.

She began to take a closer look inside of herself to try to figure out what she could do to raise her self-esteem and confidence and remain in Canada.

It was at the moment that she decided to set herself a goal of becoming a Canadian nurse!

Today, she believes that things happen for a reason, and is very appreciative for that strange woman for yelling at her, and for her appendicitis! 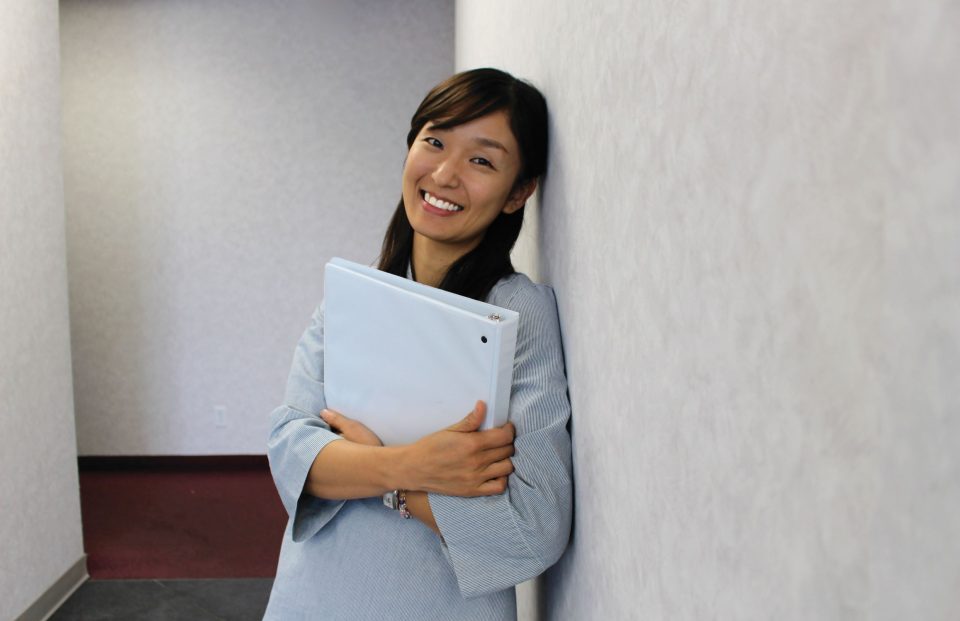 Sachiko began her journey with OMNI College after carefully researching a lot of schools.  She decided on OMNI because it was the most comprehensive and specialized in training IENs just like her.

But even after she started she still struggled with self-confidence and self-doubt.

“Is this really possible for me? Am I going to make it?”, she asked herself all the time, particularly when she was overwhelmed or when obstacles arose.

Luckily, often OMNI alumni would return to visit the school, speak with the students in the classes and share their success stories.

“Hearing their stories was a huge encouragement for me.  I saw how they overcame their struggles and made it!  I knew I could too.”

One of Sachiko’s biggest struggles was the English language.  Many of her fellow classmates came from English-speaking countries like the Philippines and India, so compared with her own skills learned in Japan, she felt more pressure.  But she overcame the struggle and pushed herself to study even harder.

Today, Sachiko says the best thing about her life in Canada is the work-life balance.

She now works as a specialty RN in the hemodialysis unit of an acute care hospital.  She is challenged and is always learning in her role, working with both outpatient and inpatient cases and acute dialysis in ER and ICU.  What she does every day is very rewarding, yet on top of that, her shifts finish on time, she gets to take a full break and still has energy after work to go out and socialize.

She loves the outdoors, enjoys hiking, camping, snowshoeing, and taking short trips to other parts of Canada and down to the US like Washington State and Oregon.  Having a full-time post, she is able to take a paid vacation every year to visit her family and friends back in Japan.

She usually goes back to Japan 2 times per year and stays there for about 3 weeks each time.  She says that “life is pretty good”.

Sachiko says “I love this multicultural country. People respect each other, they want to get to know and enjoy each person’s different culture.  And there are lots of Asian restaurants, cafes, cosmetic shops, even DAISO, UNIQLO and MUJI here too!  So I don’t miss Japan too much.

Did Sachiko achieve her goals of becoming a confident Canadian nurse?

Yes!  Canada has become her home, just as much as Japan.  She was able to immigrate as a Permanent Resident through the Family Class application, supported by her husband.  She has a secure job, earning good pay, and being a Canadian RN “gives me good self-esteem”.  She says “Now I am confident in the society! 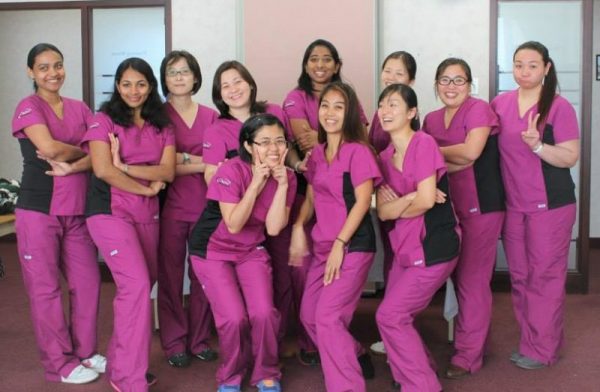 “10 years ago I never even considered becoming a nurse in Canada.  5 years ago everything was so overwhelming and seemed impossible for me.  Yet here I am today.  And because of what I’ve been able to accomplish, I don’t think I can work in Japan again – Canada is tooooo goooood!” ~Sachiko Hikawa, RN.