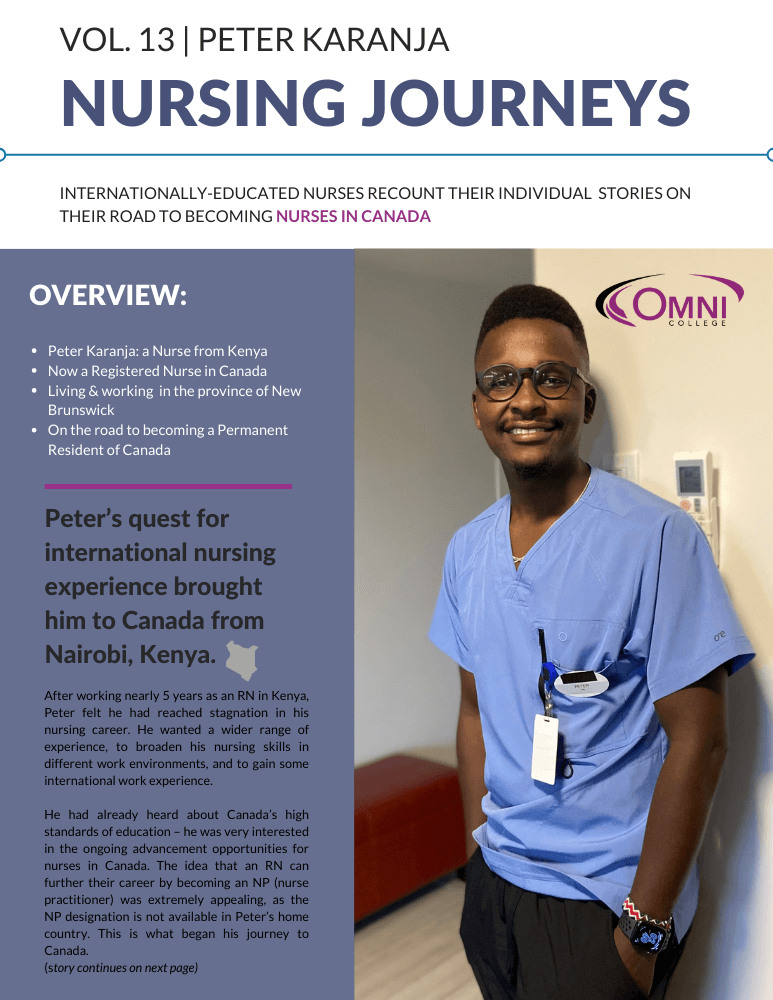 Download the full story as a PDF (Vol_13: Peter Karanja) or continue reading below.

Peter’s quest for international nursing experience brought him to Canada from Nairobi, Kenya

After working nearly 5 years as an RN in Kenya, Peter felt he had reached stagnation in his nursing career. He wanted a wider range of experience, to broaden his nursing skills in different work environments, and to gain some international work experience.

He had already heard about Canada’s high standards of education – he was very interested in the ongoing advancement opportunities for nurses in Canada. The idea that an RN can further their career by becoming an NP (nurse practitioner) was extremely appealing, as the NP designation is not available in Peter’s home country. This is what began his journey to Canada.

Peter had had the opportunity to visit Vancouver previously, and he found Vancouver to have what he describes as a “supernaturally beautiful setting – so beautiful that there is simply no way to downplay it”, and so Canada became his dream.

He was also very familiar with the track record of OMNI College’s program for Internationally-Educated Nurses. He knew that this program would help him not only achieve his nursing license in Canada, but also successfully equip him with the hands-on skills that he would need to be successful in a real Canadian workplace. This greater-picture perspective is what ultimately led him to where he is today – an employed RN in Canada who has transitioned seamlessly into Canada’s healthcare system.

The path to becoming a nurse in Canada can be very challenging, and Peter’s path was no exception. The most difficult part for him was that he failed his CELBAN test – twice.

What was even more difficult was that Peter came from Kenya, which is an English-speaking country. He could not understand how this could happen, and so the frustration of not being able to achieve the required scores brought him to new lows.

Gratefully, he says that the staff at OMNI College was what kept him inspired and motivated. “Everyone was always so eager, rooting for me to succeed even when things got tough – they were always there to support me no matter what. They constantly checked in with me and offered practical solutions, ones that I could really use. That went a long way towards my journey as an IEN. They checked in with me at every step along the way, and encouraged me to try again and offered revision resources. It was that constant motivation from the OMNI College staff that helped me to finally pass my CELBAN test and become an RN”.

Today, Peter is a Registered Nurse in Canada and is working full time. He is also on the road to permanent residency through the Provincial Nominee Program.

Back in Nairobi, Peter worked as an operating room nurse. When he received his RN license in Canada, he decided to keep his options open and wanted to try something different and chose to work in long-term care instead. He ended up finding long-term care nursing to be a very interesting job because as an RN he can practice a full scope of nursing. He also enjoys having autonomy. The amount of respect accorded to nurses in Canada is what he loves most about his job. He says that “Nurses are highly respected in Canada and I experience this every day while I’m working. This makes me feel so humbled and lucky to be a nurse”.

His life in Canada looks quite different than it was in Nairobi. He loves his job, and also enjoys his days off by going on road trips, camping, and furthering his new hobby: quad biking. He appreciates the multiculturalism of Canadians, and also enjoys having 4 seasons – these give him a chance to experience what he calls “an amazingly warm summer, a colourful spring, and a deadly winter!”

When we asked him what is one thing he wishes he had known before coming to Canada, Peter says the only thing he regrets is not having applied to more than one province for his nurse registration. The different provinces across the country each have their own different requirements, and they are changing all the time. So had he applied to multiple provinces he may have been able to achieve his RN sooner.

“It’s important to understand the differences in the regulatory body requirements, and OMNI College has been great in being able to guide new IENs through this ever-changing and complicated process.”

As an RN who came to Canada from Kenya, and who has achieved success here, Peter’s advice to others considering the same path is to “Trust in the process, and to trust in OMNI College’s long-standing reputation for successfully preparing IENs from all over the world to work in Canada. You will not be disappointed.” ~Peter Karanja, RN 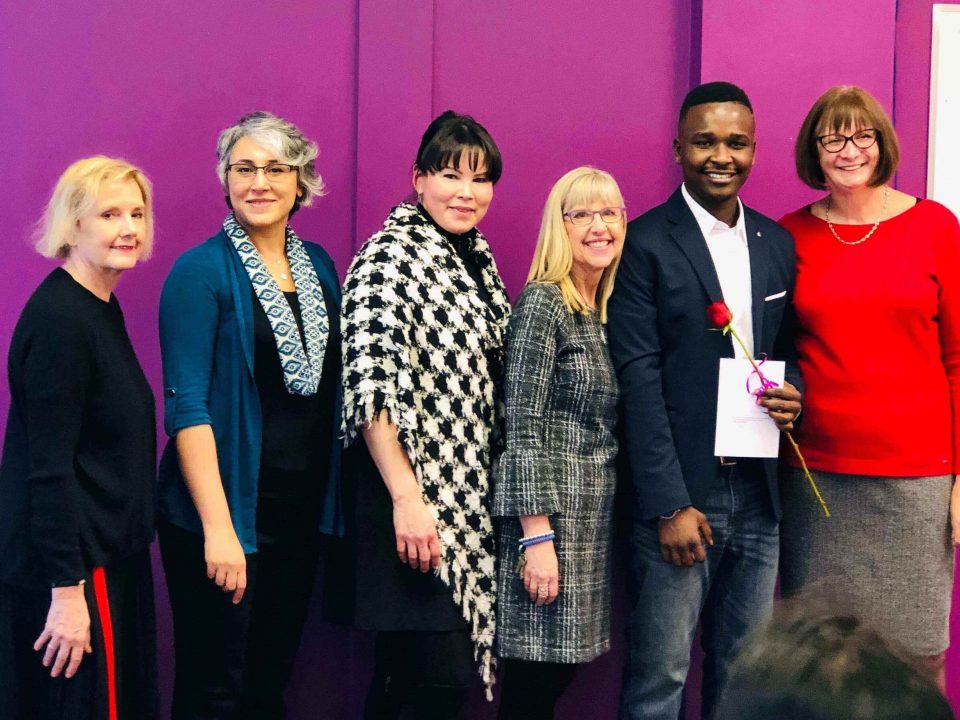 Peter with several of his OMNI College instructors.

Download the full story as a PDF (Vol_13: Peter Karanja)